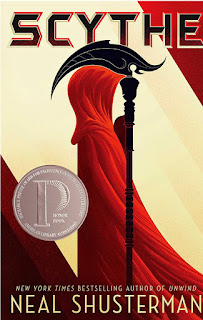 We’ve conquered death! Awesome! Well more accurately , we developed nearly omniscient  Artificial Intelligence (the Thunderhead) that solved all our problems. The answer wasn’t 42 after all.

However, a world with no death faces two challenges.

1. Death (and avoiding it) is a motivating factor to live well.

2. The planet can only handle so many people.

To counter these issues, the creators of the Thunderhead established a league of special individuals that are exempt from monitoring by the Thunderhead. Known as the Scythdom, these people have a singular mandate - the administration of mortality.


The book’s protagonist is Citra, is a strong willed teen, cut from cloth similar to Katniss from Hunger Games. In fact in tone and in pace, there is a bit of resembelence.

But these books are more than a sci-fi wrapper for cinematic teen issues.

Shusterman gives the reader plenty to chew on:


Actuaries, especially my fellow Speculative Fiction writers, might at least appreciate the approach of Scythe Farraday who studies historic mortality patterns and cause of death trends to try to reproduce the randomness of deaths that occurred prior to the Thunderheads control.

Overall the subject matter of the books is a touch dark and a bit heavy, but I’d recommend this series for both entertainment as well as something that will make you think on things long after you set the book down.

Email ThisBlogThis!Share to TwitterShare to FacebookShare to Pinterest
Labels: BookReview