Not Actually an Actuary Designation Debated 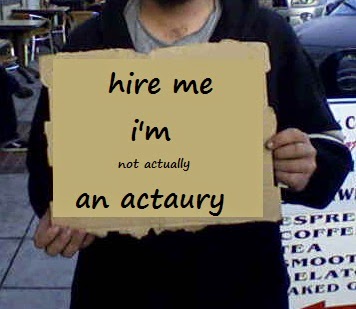 The Institute and Faculty of Actuaries recently launched a new designation, the Certified Actuarial Analyst (CAA). So it is only logical that the other actuarial bodies keeps pace, which led to the joint effort of the Society of Actuaries and Casualty Actuarial Society.  They are considering of their own new qualification for people that are Not Actually Actuaries, or NAA.

"It's like the razor blade race , 4 is great but 5 is a whole new level." explained an SOA board member. "And I hate to stop there, let's go to 6. You can add one on the on the back if you run out if room in front. Actuarial designations are the same. You can't have too many."

Opponents of the designation contend that the NAA will further clutter an already crowded alphabet soup.

According to recent estimates, after excluding the financial and insurance industries, the number of people that actually know what actuaries are is up to about 27. Adding NAA's to the list will seem to negate any progress on getting the rest of the public to understand what actuaries are and what they do.

NAA's would have to sit for exams, pay dues, and abide by actuarial codes of conduct. They just won't get paid as much as other actuaries.  For employers and recruiters who want to figure out what type of employee  this would be, the best parallel is Non-Alcoholic beer.  You get the whole experience of a regular beer, just without the brain numbing side effects.
Posted by Nate at 5:35 AM