Some insurance is short term in nature, but things like Annuities, Long Term Care and Life Insurance require forecasts far into the future, often 30 to even 50 years!  30 years ago there were no smart phones, no YouTube videos of cats, and "Googol" meant a really large number. (10 with 100 zeroes after it).

The forecasting models we use are not as advanced as Doc's DeLorean.

To be honest, Actuaries don't know what exactly will happen in the future. Although I played with this idea in my more humorous posts (Scenario 241 Sucks and Actuary Accidentally Invents Time Travel).  The models are basically advanced tools to see how many times you'll get snake-eyes on the craps table if you played once a month for the next three decades. Thankfully, most insurance risks are predictable in the long run.

But, financial mathematicians have also had to eat some crow when the unpredictable happens and models fail.

For me, I think that running a predictive model without considering what the future might look like is like a meteorologist predicting the weather using a computer and never looking out the window. For instance,  I think the recent study from the Global Challenges Foundation on 12 Risks With Infinite Impact should be mandatory reading. Full report here, summary here.

I therefore submit for your consideration some predictions of events (good and bad) that will occur over the next 30 years (or sooner!):


The Age of Robotics and Automation

You will run into more computers and robots in a day than you will people. Your fridge will order groceries for you.  Your running shoes and your toilet will give you bio-metric readings everyday, and a robot-doctor will synthesize the information and detect illness before it happens and recommend a meal plan to optimize your health. You will hop into your driverless car to go to the beach because your robot doctor recommended soaking in the sun to get some Vitamin D and some relaxation. I could also see robotics being the top industry in the Dow. Biggest question is how will we meet the energy need?


Health and Education Will be Dramatically Different

Everything from public elementary schools to private universities will have to go through some sort of reinvention process.  Similarly, the models for care across the spectrum from birth (maybe design your own baby?) to death will undergo major makeovers

There will be water shortages, droughts, and as a result social unrest.  These crises will also spur innovations in sewage sanitation, desalinization and a restoration of the water supply. We could end up under domes if radiation goes nuts. On the other hand, that beach you are going to for vacation doesn't exist today. It will in the future as coastal geographies start changing.

People Will Live in Space

Whether in orbit, or on Mars, or elsewhere, portions of the world will choose to move into the next frontier.  Perhaps to get away from pestilence and overcrowding, or maybe to find some utopia.

No, we will not see the walking dead in our neighborhood.  Instead some mass pestilence/super-bug will take a heavy toll on the world's impoverished, young, and elderly. There will be some controversial quarantine practices if the pandemic is severe enough.

On the other hand, death as we know it will change.  Life extension, whether through cryogenics, or manufactured replacement organs, will have continued influence on human longevity.

Or at least part of it.  Hopefully the next major earthquake stays out of a highly populated area.  In addition to the Cali quake, there are likely to be a handful of life altering natural disasters that could happen - the Yellowstone Volcano, the Midwest Fault-line, mega Tornadoes and Hurricanes. Probably not a Sharknado though.


We Will All Be Cyborgs

Some believe we already are.  The evolution of man and his tools will ultimately converge. As people become more bionic, our sports scene will change as well.  Games will be played at a faster pace, distances and level of difficulty will increase, balls might get smaller or perhaps larger and heavier (apologies to Tom Brady). 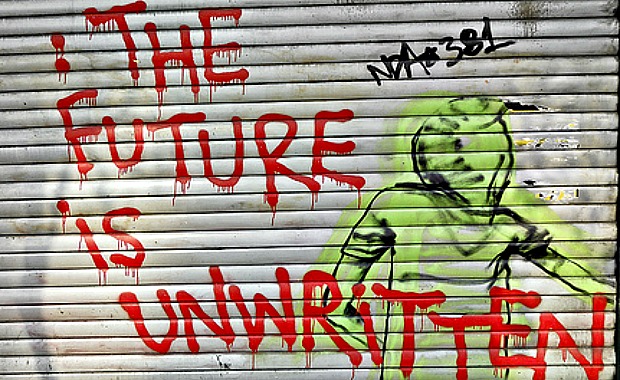 There are some other things that get my brain going, but I have no clue if/how they will unfold in the next 30 years:
What do you think about these predictions?  What are yours?
Posted by Nate at 5:43 AM

Email ThisBlogThis!Share to TwitterShare to FacebookShare to Pinterest
Labels: natenotes