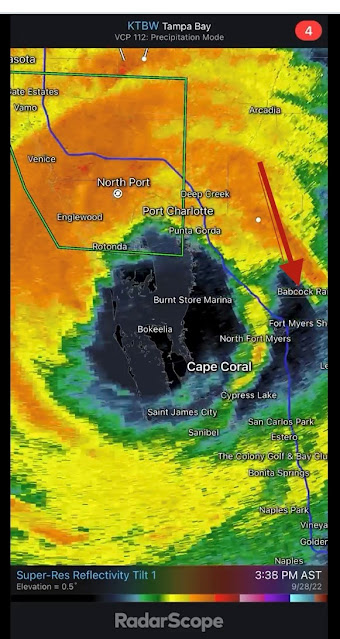 I went toe to toe with Hurricane Ian on September 28, 2022. This was probably the craziest day of my life.

After 48 hours of anticipation and anxiety we were on the receiving end of a furious storm, pummeling our house with 100mph winds for hours and hours and hours.

A storm we thought would miss us, came and punched us square in the nose.

This morning, the sun rose, and I am grateful for today.

With four walls and a roof.

And just 40 miles to the west of me, things have completely disappeared.

And as I process through this, the thoughts that ring in my ears are bitingly poignant clichés about how precious our moments are.

How delicate and fragile we are.

How we need to continually to return to what really matters in this very short, very crazy, very beautiful life.

And of course, being an actuary, I am thinking about uncertainty and risk.

You Try to Think Ahead

I am very much aware that being able to write this blog today has quite a lot to do with luck.  There is probably another worse disaster scenario that has me writing from an emergency shelter, and an even worse scenario that has me permanently silent. There are also favorable scenarios, where I am commenting on this recent storm from a long distance away.

However, having gone through it, a lot of other decisions have paid off.  We chose to live inland over the coast, we chose to buy a home that was built for extreme weather, and we chose to have alternate energy sources. There are still several decisions that would have helped us even more, but at some point you make your bets and let the game unfold.

Risk is everywhere.  It is not always a category 4.99 hurricane.  But it is there and preventative stuff makes a huge difference. Choosing to save over spend. Choosing broccoli over burgers. Protection and prevention isn't always fun or sexy, but to have peace of mind when you need it most, is absolutely PRICELESS.

Should I stay or should I go now? From about a week prior to the storm's arrival until the last call for evacuation, we sang that chorus a hundred times.
Initial forecasts had a cone that was favorable for us in terms of storm direction and intensity. Each subsequent update was a Bayesian nightmare as the forecast kept drifting closer and Ian's intensity grew.
For the blackjack players out there, it was like going from being dealt a 10 or 11 to having 16 with the dealer showing a 10 or an Ace.
A lot of attention was on the center of the trajectory, but I had my eye on the fringes, and I did not like what I was seeing. I am not a hurricane model expert, but I am well aware that the variance is in hundreds of miles. And I got more and more uneasy as time ticked down.
But we pulled from many data sources including the news, weather reports, and locals who had been through storms before. The last group was invaluable for preparedness and getting ready for the worst.
At our last go/no go check in we looked at our shuttered house, our supply of hurricane supplies and felt like we could handle the storm and almost importantly its aftermath.
With hindsight, I would have preferred to evacuate, but in this case, we are among the fortunate few that fared pretty dang well, all things considered. Coastal areas near us are demolished, completely wrecked, and these are very sober reminders that things could have turned out much differently.
Even with all the agonizing over the data - I still fell victim to classic decision making errors.
I have changed my thinking around biases and decision making errors over time. I used to think that if you know about them you could avoid them. But more and more I realize that these are just part of the risk game. You can certainly work to minimize them, but humans are not computers. (At least not yet, but that is a story for a different day.)
Like the pandemic, public safety messaging becomes a hard game to play. Had we heard the message, 'The Sky is Falling - Get the F* Out" we may have been more motivated to boogey. But had the storm been a bit milder, that sort of hyperbolic statement undermines trust in the public authority.  People will give the modelers crap for not getting the storm right, but for those of us in the modelling game, we know how hard complex crap is to model, and especially as each new storm faces new conditions, we have to appreciate the difficulty of the task.  Lives were saved because of these models, and that should not be forgotten.

And Then the Shit Hits The Fan

Living through a worst case scenario sucks. I've been through financial crashes (Dot-Com, 2010, Housing), 9/11, COVID-19, and now a category 4.99 hurricane. I'd be happy to avoid any other sort of historic crisis in my lifetime. Not only do you witness losses of life, property, and wealth, there is a psychological heaviness that pulsates through all those in the wake of the disaster.
The behavioral economists tell us that the fear of losing hurts more than thrill of winning. And I'd fully agree that destruction is very painful on an individual as well as communal level.
But I have a towel in my office, with two words on it, DON'T PANIC. Many of you will understand the reference.  But in the sea of anxiety of emotion and stress, in order to survive mentally, I needed to have some place to anchor, some solace of serenity to hold on to.
Through this experience, that was largely my family, and then various spiritual practices I have used in much more minor settings.
When the storm comes, and it will, what do you have to hold on to?  How will you get through to the other side?

And Eventually it Passes

Hours of pounding wind and rain felt eternally long.
But bit by bit the wind calmed down, and the rain stopped.
And for a moment, we could catch our breath.
Try to comprehend the incomprehensible.
And that the world we would wake up to the next morning will be totally different.

Then Settle in For the Long Haul

The anxiety and shock and emotional turmoil that a catastrophe brings is beyond words.
And it is quite defeating to come face to face with the wreckage.
But you pick up that first fallen branch and the rebuilding begins.
This phase of the journey is the test of RESILIENCE and RESOURCES and RESOLVE.
For those that lost everything, this is where insurance provides such a critical lifeline. But in the aftermath, I am wondering how long high risk areas such as California, and the coastal US will be considered insurable at all. Or perhaps the remaining few insurers who stick around will reprice and redesign insurance so it will become high premium/high deductible that only a subset of the population will be able to afford. And the rest of the working class, and poorer will continue to live with naked exposure to catastrophic risk.
Meanwhile, communities will band together and response teams will help the displaced.  I am so grateful for the caravans of power line workers that have trucked in from all over, ahead of the storm, to be ready to get to work after. Already I have seen neighbors inviting strangers into in their houses, cooking meals for the hungry, and stepping up to help in any way they can.
The next kick to the groin is that the ability to get back up is impaired by infrastructure difficulties. Power down, gas stations closed, and people who would staff and work at those places have to deal with whatever burdens the storm dumped at their feet.
Much like estimating the initial hit the storm will make is difficult, the estimate for rebounding is a very difficult one, and probably will take a lot longer than many expect.
And while homes can be rebuilt, shattered souls can be a bit harder to repair. People have lost family, have lost the places they grew up in, and sometimes the most important work that needs to be done is to be a soft shoulder where tears can fall.
The long road to recovery is just beginning.
But for now, we have today.
Posted by Nate at 7:02 AM